Aristotle’s Lyceum is one of Athens’ most recently excavated sites and first opened to the public in June 2014. Brought to light by archaeologist Effie Lygouri in 1996, the area is now crisscrossed with well-tended walkways lined with lavender, asphodel and thyme making it an ideal retreat from the bustle of the city.

As you wander round this pleasant site it strikes you that here, the present is in keeping with the past. This lyceum was known as a Peripatetic School (from the Greek word peripatos, which means stroll) In Aristotle’s day, students and teachers would ramble through tree filled groves as they discussed philosophy and the principles of mathematics and rhetoric. Today, visitors can once again walk through gardens as they enjoy this well presented site, perhaps wondering what a student’s day would have been like here nearly two and a half thousand years ago.

Aristotle was himself a student of Plato and, although he was Plato’s most promising student, he held opposing views on several fundamental philosophical issues. It was here in this incredibly significant spot- his own school -that Aristotle developed and taught his method of inductive and deductive reasoning, observing the workings of the world around him and then reasoning from the particular to a knowledge of essences and universal laws.

The Lyceum was a school of unprecedented organized scientific inquiry and In a sense the first major centre to put forward the modern scientific method. It was from here, too, that Aristotle wrote extensively on a wide range of subjects including politics, metaphysics, ethics and logic.

It wasn’t all intellectual pursuits for the fourth century BC scholar, however. Athleticism was highly valued and there are the remains of a gymnasium and palestrae where students would box, wrestle and compete in the no holds barred pankrateion.

How fitting that in twenty first century Athens, Aristotle’s Lyceum is once again a spot for walking, an oases of calm, and still, perhaps most importantly, a place for thought and learning. 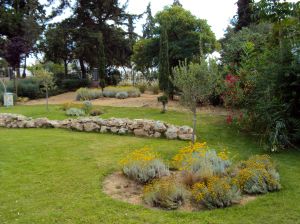 It is located in central Athens just off Rigilis Street near the Byzantine Museum. For more information visit http://www.visitgreece.gr/en/greeceonthespotlight/aristotles_lyceum_opens_to_the_public

(Open daily from 8am to 8 pm. Admission is free of charge.)

If you would like to see my video about the Lyceum:  https://youtu.be/Z9gumyQ7CVE